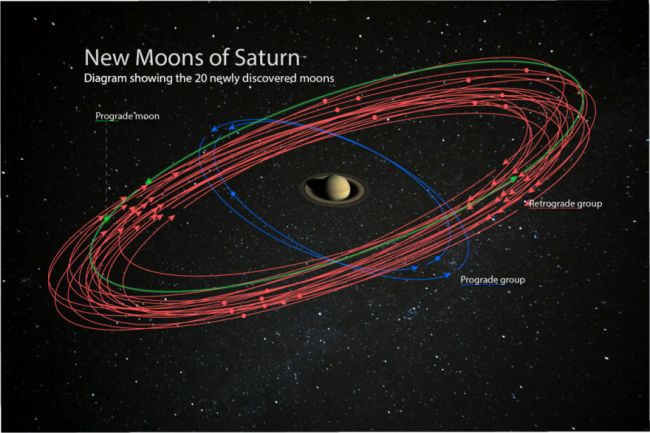 Saturn has overtaken Jupiter as the solar system’s satellite king.

All 20 moons are tiny, measuring about 3 miles (5 kilometers) across. Seventeen of them have retrograde orbits, meaning they move around Saturn in the opposite direction to the planet’s rotation. These 17 all take more than three Earth years to complete one Saturn lap, and the most far-flung one is the most distant Saturn satellite known, discovery team members said

One of the three newly discovered “prograde” moons has an orbital period of more than three Earth years, while the other two complete one lap every two years or so.

Each of these satellite groups is likely evidence of a long-ago impact that destroyed a larger moon that had been orbiting in that general area.

“This kind of grouping of outer moons is also seen around Jupiter, indicating violent collisions occurred between moons in the Saturnian system or with outside objects such as passing asteroids or comets,” Scott Sheppard, of the Carnegie Institution for Science in Washington, D.C., said in a statement today (Oct. 7) announcing the discovery.

“Using some of the largest telescopes in the world, we are now completing the inventory of small moons around the giant planets,” Sheppard added. “They play a crucial role in helping us determine how our solar system’s planets formed and evolved.”

For example, the newfound moons’ existence suggests that the impacts that created them occurred after Saturn was fully formed, Sheppard said. The gas giant was surrounded by a disk of dust and gas as it was taking shape. If these tiny moons had to plow through all that material on their way around Saturn, friction would have sapped their speed and sent them spiraling into the planet.

Sheppard discovered a dozen Jupiter moons last year, and the Carnegie Institution organized a public contest to name five of those worlds. If you missed that competition, don’t worry: You now have another chance.

“I was so thrilled with the amount of public engagement over the Jupiter moon-naming contest that we’ve decided to do another one to name these newly discovered Saturnian moons,” Sheppard said. “This time, the moons must be named after giants from Norse, Gallic or Inuit mythology.”

All 20 newfound Saturn moons are fair game for naming. If you’re interested, submit your proposal by tweeting @SaturnLunacy from now until Dec. 6. Include your reasoning and the hashtag #NameSaturnsMoons.